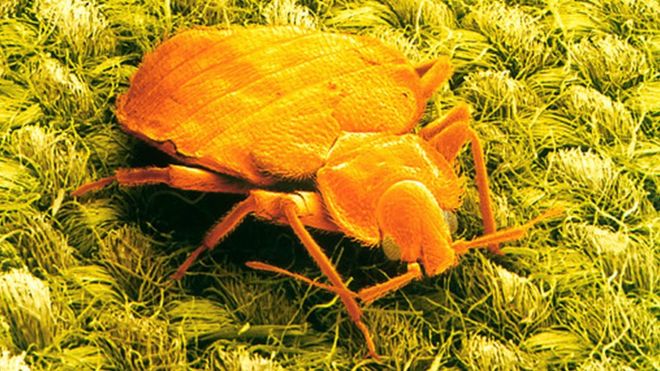 Bed bugs appear to have a strong preference for particular colours – a quirk that could be used against the troublesome pests, say scientists.

According to the work in the Journal of Medical Entomology, the blood-sucking insects love black and red but hate yellow and green.

This information could help make better traps to lure and catch the bugs.

But it is too soon to say if yellow sheets can stop them nesting in your bed, say the US researchers.

Bed bugs are tiny and they like to live close to their next meal – your blood. They can hide in the seam of your mattress or a joint in your bed frame. They tend to prefer fabric and wood over plastic and metal.

But Dr Corraine McNeill and colleagues wanted to find out if colours affected where bed bugs might dwell.

They carried out a series of experiments in their lab, placing bed bugs in dishes with different colour shelters made out of card.

Rather than taking cover at random, the bugs appeared to select the shelters according to their colour, showing a preference for black and red.

Dr McNeill said: “We originally thought the bed bugs might prefer red because blood is red and that’s what they feed on.

“However, after doing the study, the main reason we think they preferred red colours is because bed bug themselves appear red, so they go to these harborages because they want to be with other bed bugs.”

The bugs appeared to dislike yellow and green shelters, possibly because these bright colours remind them of brightly lit areas that are less safe to hide in, say the researchers.

Past studies have found these two colours are unattractive to other blood-sucking insects such as mosquitoes and sandflies.

Dr McNeill said: “I always joke with people, ‘Make sure you get yellow sheets!’ But to be very honest, I think that would be stretching the results a little too much.

“I don’t know how far I would go to say don’t get a red suitcase or red sheets, but the research hasn’t been done yet, so we can’t really rule that out completely.”